Along the Kayamkullam-Thiruvalla Highway from Thiruvalla town, about a kilometer and a half after the Cross Junction, to your right, lies the Paliakara St. George Orthodox Church. It was an early April evening, as Kurian and I arrived at its gates. The evening prayers had just concluded and the laity dispersed into the church grounds. Kurian rushed to the trustee’s office to ask for the acolyte as we needed to catch him just as he finished his prayers.

It had rained that afternoon and though that was not uncharacteristic at this time of the year, the sky was a persistent gray. From the gates of the church that evening, one could see a gray cumulonimbus that hung heavily, cloaking the town of Thiruvalla. I had spent the early half of the day in Kottayam scanning the records at the Orthodox Theological Seminary, checking for details of churches. Kurian was downstairs talking to one of the Rambans[1], updating himself on the many, less than theological, affairs of the seminary.

I decided to stroll about the seminary campus but the April showers made a leisurely walk impossible, so I walked through the narrow wooden corridors to the museum at the far end of the seminary complex. The Meenachal river curved from the east, cutting into the tall grass, to create a horseshoe route for itself. Even as the rains came down, I men sawed into an old teak damaged by the previous night’s thundershower.

The room I walked into had suggestions of a museum without quite being one. Sure enough, it had collections of old books, sacred beads and Syriac bibles which were at least a couple of centuries old, ancient urns and photographs of churches and of the many Metropolitans that guided the Eastern Churches of the Malabar. The museum is a rectangular room, with a low roof and uneven wooden flooring. My guide, a student of the seminary looked bored and on occasion ill-informed about the objects. He didn’t seem to mind that I wanted to touch some of the artefacts. Though the presence of antique objects and the dusty interiors suggested something of the nature of its past, the room lacked a salient feature of a museum — the disciplining of space. More than a collection, a museum ought to be a curation of the past, a carving out of that which was, from that which is.

It was my guide’s generosity, however, that led me to a photograph stowed away in the eastern wall of the museum. It is that photograph, discovered in an unkempt museum, that rushed us to Thiruvalla

I was distracted by the kalkurisu in front of the western door of the church[2]. A woman in a pale brown saree stood lighting the oil wicks at the base of the stone cross, but what drew my attention was what seemed like a steel framed umbrella erected above the kalkurisu. There was a slight shower and the woman and the burning wicks were protected from the rain.

As you walk through the poomukham of the western entrance, a vague and yet pungent smell of burnt wicks overtakes your senses. On either side, people crowd around oil lamps. The passage through the poomukham ushers you into the Bishop’s quarters in the southern wing of the hykala. Through the dwarfed door, you notice a neatly prepared bed decorated with consecrated fabric and next to it, the familiar portrait of Parumala Thirumeni[3], one of the most identifiable faces of the Eastern Orthodox tradition in the Syrian Malabar tradition. I saw an old man kneel in front of the portrait, and stepped back into the hykala.

Kurian was waiting for me in the centre of the hykala next to the thookuvilakku. Next to him was the acolyte, a frail old man, with a pronounced moustache. To my right, on the north-west corner, a wooden stair led to what I expected to be the balcony. The low wooden western ceiling constituted the base of the balcony. The rest of the roof was the familiar combination of thick wooden beams supporting a lattice-like network of sloping wooden planks. 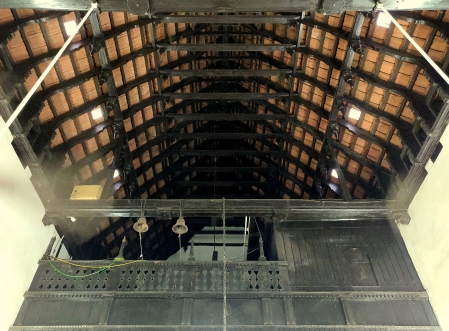 Perhaps the acolyte noticed the direction of my eye, and even before I asked, he informed us that the balcony was sealed. I asked if we could see the Madbaha. He acolyte walked up to the kestroma and vanished behind the Madbahaviri. Kurian and I stood expectantly as the Madbaha was unveiled. 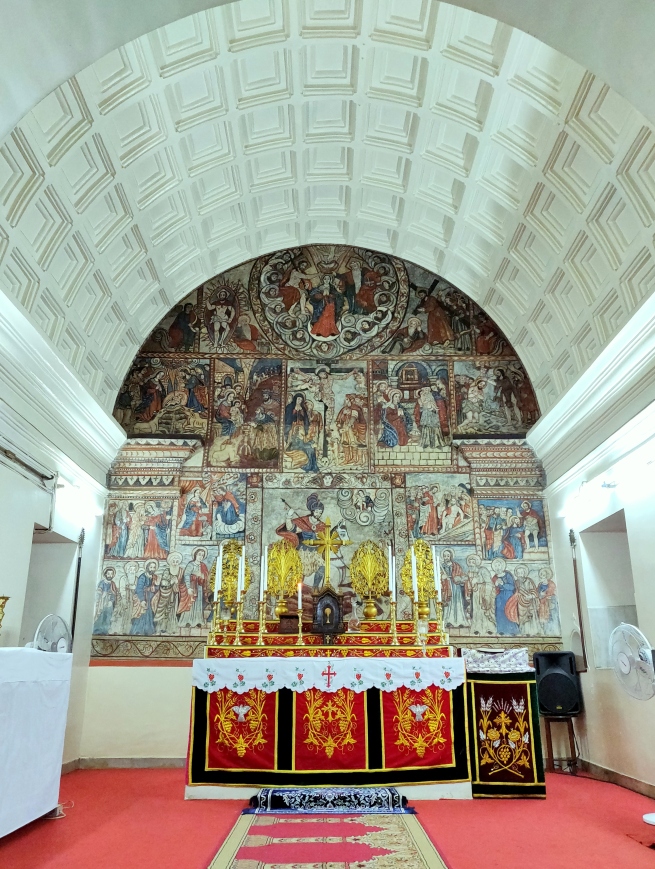 The mural – blues and reds

The first thing you notice about the magnificent mural of the Madbaha is that the whole composition is constituted by three colours – blue, red and white. The narrative potential of the mural seems to hinge on the combinatory potential of the blues and the reds on a white surface. The narrative is a catalogue of the important episodes of Christ’s life as outlined in the Gospels. Implied in the organization of colours is a hierarchization of the characters in the narrative. In the entire layout, only Christ and Mary (and on one occasion God) are robed in red.

Blue, when used, is often a cloak used to embellish the red robe. In the portions that represent the resurrected Christ, we see him in a white loincloth wrapped in a red cloak. Only on two other occasions, the Baptism and Crucifixion, do we notice a Christ in a white loincloth, devoid of any colour. In contrast, many of the other principal characters, such as the disciples, the patron saint of the Church, St. George, or St. John and Mary of Clopas (in the Crucifixion scene) all appear to be attired in blue robes wrapped in red cloaks. Though the whole visual structure hints at creative conservatism, the reversal of the colours appears to be a deliberation on their narrative potential. The visual narrative is itself arranged around the central iconography of St. George slaying the dragon. This very central image makes it possible for us to distinguish two parts to the mural.

The base of the mural

The base seems to be a rectangular arrangement whose length and breadth is balanced by the central icon of St. George. The base is itself two-tiered, with its upper left portion depicting two important episodes of the Virgin Mary’s life – the Annunciation and the sisterhood of Elizabeth and Mary. The upper sections in the right are constituted by two significant miracles from the Gospels – the resurrection of Lazarus, and the allaying of St. Thomas’ doubt by the resurrected Christ. Here only Thomas is bestowed with a halo. Is it to suggest the linearity of Thomas’s journey from doubt to faith, I wonder. Perhaps it is a reassertion of the role of St. Thomas in the indigenous imagination; to the indigenous mind, St. Thomas’ journey towards faith was crucial enough to be highlighted in the larger narrative scheme. 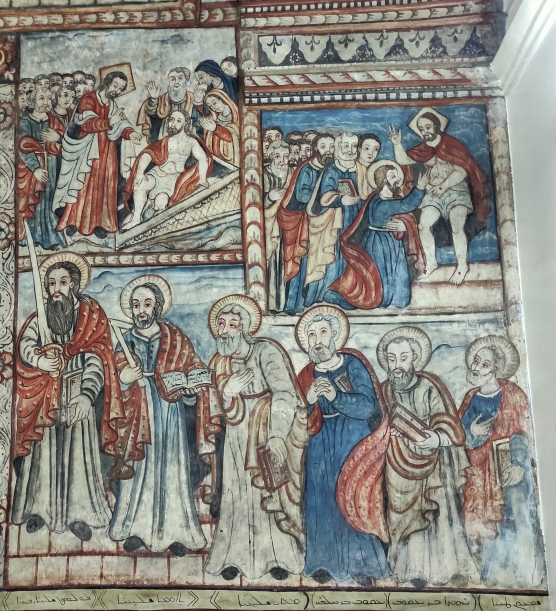 the characterisation of St. Thomas as unique among the apostles

The mural base is also characterized by an attempt at narrative continuity: there appears to be a parallel drawn between St. Thomas’ skepticism and Mary’s skepticism[1]; the news of Mary’s conception is adjacent to the news of John’s conception by the elderly Elizabeth. The base of the mural also prepares the viewer to appreciate the narrative as it continues into its upper tiers.

the base of the mural

The upper section is divided into two layers. The lower layer is organized around the central episode of the Crucifixion. To the left of the Crucifixion are the crucial episodes of the Nativity and the Adoration of the Magi. To the right are two episodes centered around John’s life. First is the episode of John’s birth: Mary and Joseph praying as Zachariah holds the infant and adjacent to that is the Baptism of Jesus by John. The upper layer is organised around the episode of Mary’s Assumption. The Assumption is flanked by the two stages of Christ’s own journey towards death: the Cross bearing Christ at Golgotha and the Resurrected Christ. 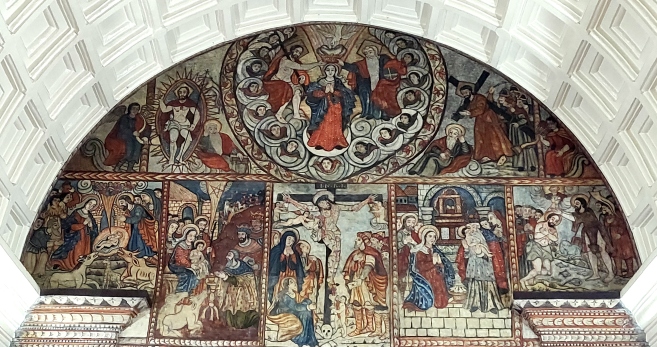 The whole upper section of the mural is an elongated semicircle resting on the rectangular mural base. The episodes were delineated by neat floral frames. This visual demarcation of the episodes does not, however, break the continuity of the larger visual narrative. In many ways, the very fabric of the visual arrangement seemed to be a study of the concomitant inevitabilities of birth and death. Even the circular interplay of the different specimens of reds and blues only appear to re-enforce this point.

Perception is thus a function of proximity. Seen from a distance the mural could very well be treated as a deliberation on the arrangement of reds and blues on a white canvas. Seen as such the iconography may be a mere appendage to the artist’s imagination. The truth is there is really no way of substantiating the logic of the arrangement.

However, as we stand at the kestroma we see that the mural on the Madbaha offers the only bit of colour in the interiority of the church’s structure. Even within the Madbaha, only the eastern wall, which housed the mural exhibited any colour. It appeared as though the mural was the focal point of the imagination that engineered the Paliakara Church. 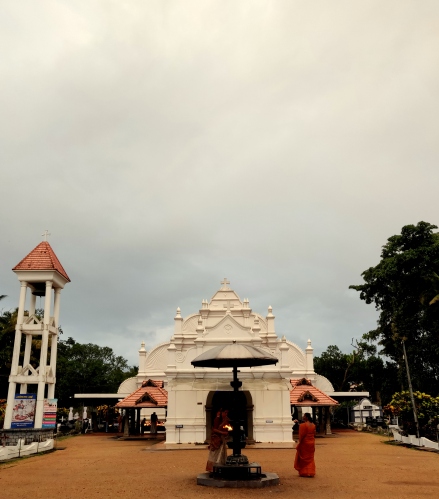 the western section of the Paliakara Church with the Kalkurisu

As I had walked through the western doors of the church an hour earlier, I had set my eyes on: the old Bishops’ quarter, robust stone pillars, an elegant thookuvilakku organizing the interior dimensions of the church; and yet amidst all those aspects the Madbaha remains the most majestic.

I stood at the door of the church.  The late afternoon shower had ceased and the overwhelming gray had dissipated. The church grounds were deserted. The lone lit wick in the kalkurisu was extinguished by a breeze. A beautiful lavender made its way from the horizon and bled into the fading twilight blue. 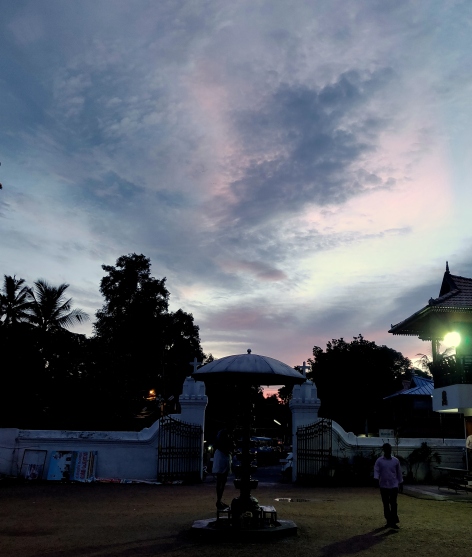 the evening as the clouds dissipated

[1]One of the ranks in the Theological hierarchy just below the Bishop.

[2]The primary entrance of this church.

[3]Translates as the Bishop from Parumala. It is a reference to Geevarghese Mar Gregorious from Parumala, one of the most famous bishop-saints of the Malankara Syrian Church.

[4]Though comparison between Doubting Thomas and the young anxiety of the Virgin Mary is not obvious it reveals the significance of skeptical thought in the larger rubric of Christian mythography. Just as Thomas was skeptical about the news of Christ’s resurrection so was Mary skeptical of Christ’s conception in spite of being a Virgin.

All photographs and text are by Jonathan Varghese, and cannot be reproduced elsewhere. (jonathan.varghese@gmail.com)

Jonathan Varghese is affiliated with the Department English, Lady Shri Ram College, University of Delhi. This is a part of a larger research project on the murals, structure and oral sources for the history of the Nazranis 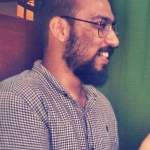